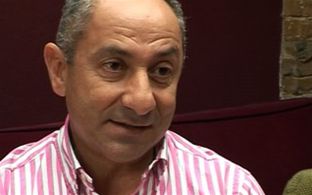 Argentinean footballing legend and former Tottenham Hotspur manager Ossie Ardiles is a guest speaker at thg’s Corporate Hospitality event at the UEFA Europa League Final at the Aviva Stadium, Dublin on 18 May.

Here he talks about the rise of Portuguese football and as the Premier League campaign draws to a close he gives his thoughts on this season’s highlights.

With two teams from Portugal battling it out for the UEFA Europa League title for the first time ever, is this a clear sign that Portuguese football is on the ascent?

Despite being in the second tier, there is some very competitive football being played in Portugal. Unofficially there are the first leagues in Europe - England, Spain, Germany, France and of course Italy. Then it declines a bit with Portugal in the second tier but they are playing very good football. The style of play is not like ‘Anglo Saxon’ - it’s much more passive with much more ability. This is why they attract so many Brazilian and Argentinean and in general South American players because they like the kind of football that’s played in Portugal. It is definitely becoming increasingly competitive.

What are your predictions ahead of the Porto – Braga final?

in a final anything can happen. Even though it will be very open-ended, the clear favourite is Porto. They have had a wonderful season. They were already champions with four or five games to go. They are unbeaten in the league so that’s quite an achievement as well. They are the number one team in Portugal. Whereas Braga is a team that has only finished about fourth in the league so it’s very clearly Porto is the favourite. At the same time in a final you never know.

Both teams are pretty well organised defensively so I don’t think there’s going to be a lot in it so my prediction is 2-1 to Porto.

Looking to Premier League football, is there still a role for Carlos Tevez at Manchester City next season?

Yes it is a concern but I am sure that Roberto Mancini and Manchester City want to retain him next season. The number one player in my opinion is Carlos Tevez. Tevez has mentioned before that he would like to leave and obviously he would not be short of interest from European clubs such as Real Madrid and Inter Milan. But I think he seems pretty happy right now. They are a very ambitious club and are in many ways they are a team for the future. Of course he has suffered this season with no Champions League but I think he may stay.

While money has not bought the Champions League for Chelsea, do you see Manchester City achieving what Chelsea has failed to do?

Manchester City has a constellation of superstars and an enormous amount of money has been paid by the club for these great players like Tevez. To be perfectly honest Manchester City has had a pretty good season. Of course the number one thing is to win the Championship and that means displacing a team like Manchester United. However, that is not going to be easy. In saying that, Manchester City has had a tremendous season after winning the FA Cup and winning last night (17 May) against Stoke City with two goals from Tevez. They are in the third spot now meaning automatic qualification for next season’s Champions League. So it has been a very good season indeed.

As a former manager of Tottenham Hotspur what’s your take on the season they’re having?

Tottenham has had a fantastic run winning games in Europe, despite having a very bad day against Real Madrid. They had been doing well but from the last couple of months it looks like they are going to finish fifth. It is still quite an achievement to be fighting like Harry Redknapp does against teams like Arsenal, Man United and Chelsea. The amount of money they are putting into the game is much bigger than what Tottenham is investing. So it’s quite an achievement to come so far.

Do you have any aspirations to get back into football management in the UK?

Yes I would like to. I am doing a lot of events and work with the media at the moment but if possible I would like to be a manager again. I’ve not so much interest in managing abroad as I have been abroad for a long time. In principal because I have five grandchildren in England I would like to manage there if possible. So we will see what happens.

Ossie Ardiles is a guest speaker at thg’s Corporate Hospitality event at the UEFA Europa League Final at the Aviva stadium, Dublin on 18 May.

thg is a marcus evans company.